The combination of an unglazed base and glazed top adds a cool, stylish look. 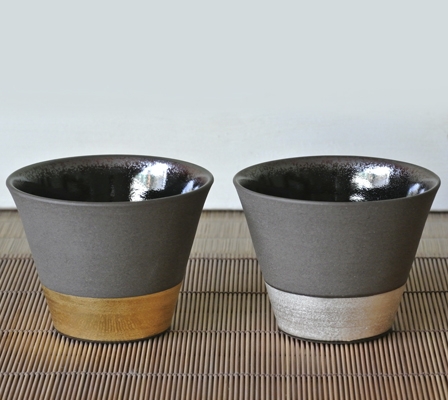 In the Kamakura era, a Zen monk studied at Mt. Tenmoku, which was a center of Chinese Zen Buddhism. He brought back the custom of drinking tea together with iron-glazed pottery. Since then the iron-glazed tea cup has been called “Tenmoku.” The Fudogama Tenmoku series features a beautiful contrast of an unglazed outside and a glossy inside with an iron glaze. It is thinner and lighter than usual pottery. We designed it with the hope that the gorgeous gold and silver decorations would add glamor people’s daily life. This large choku can be used as a sake cup, a tea cup, or a small bowl.

- This is a perfect gift or souvenir.
- Depending on the glazing and baking process, the color may appear differently. It may also cause variations in shape and thickness.
- This product is not microwavable.